According to figures provided by Deutsche WindGuard, 26774 wind turbines with a capacity of 44947 megawatt [MW] were in operation in Germany at the end of 2015. 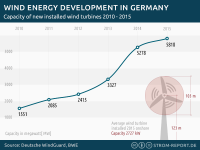 1115 new wind turbines were installed during the year, which added 3536 MW to the land-based wind energy development. Furthermore, 546 new offshore turbines with a capacity of 2283 MW were connected to the grid. Together the gross additions in 2015 were about 5818 MW, which means an increase of about 10% compared to the previous year.

According to a report by Bloomberg New Energy Finance, Germany has overtaken the UK in the rate at which it is installing wind turbines at sea. More than 3,000 megawatts of offshore wind power was connected to the European grid last year with the vast majority coming from Germany.  Guardian 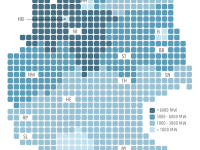 When it comes to the total installed capacity, rankings show that Lower Saxony leads the comparison between German states with 8602 MW. Schleswig-Holstein follows with 5897 MW in second place and Brandenburg comes in third place 5849 MW. 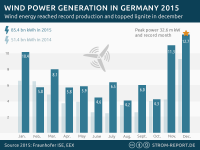 The German electricity system has reached a new milestone, generating 85.4 bn kWh of wind power in 2015, which is the highest amount ever recorded and 66% more than 2014. Nationwide, wind energy accounted for 13.3% of German electricity generation during the last year.  Energy Charts

Strom-Report Letzte Änderungen am 21. November 2017 Deutsche WindGuard
About Strom-Report
Strom-Report [Power-Report] is a project run by a group of German data journalists. The blog was created to showcase infographics and visual thinking focused on energy topics and climate change.The blog is in English, the website itself is predominantly in German.
Stay connected
Twitter
Facebook
Pinterest
Article