Since the turn of the millennium the average electricity price for private households has risen from 13.94 to 29.16 cents per kilowatt hour. That translates to a total power price increase of 109% or 6% per year on average. Included in the 29.16 cents are the costs of electricity generation, transportation and all taxes and duties.

55% of the power price for household consumers and small businesses in Germany consist of components determined by the government. These include charges for using power grids (25.6 %), levies for financing investment in renewable energy (23.6 %) and other kinds of taxes (eg. GST 16%). The renewable energy surcharge that pays producers the state-guaranteed price for renewable energy and has been set to 6.88 cents per kWh for 2017.

Commercial and industry consumers are exempt from some components of the power price [EEG levy, grid charge] to a varying degree. These subsidies increase the price for the remaining customers.

Because of the increase in grid charges and the EEG levy almost every second supplier (430) increased prices by Ø 3.5% in the first quarter of 2017 already, which affects around 17 million households. Further price adjustments are expected so that the upward trend will most probably continue.

Cost of electricity per kwh in €-Cent 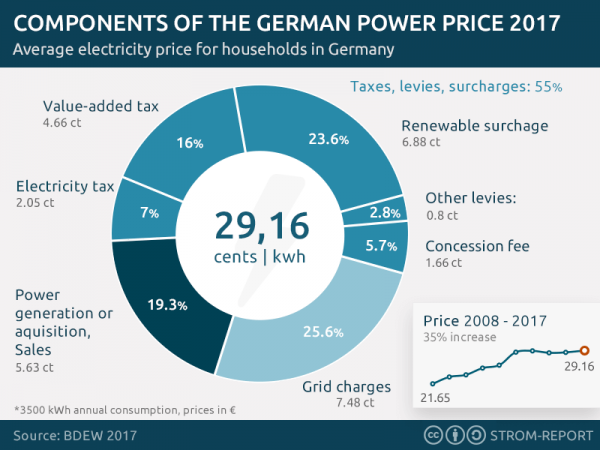 What do you think about the electricity prices in Germany?

We’d love to hear what you think about  the article or maybe you have a question about something you read. Either way, let us know by leaving a quick comment below.