The growth of renewable energy continues to be of great concern to the German population. This is the findings of a recent survey conducted by Kantar Emind and commissioned by the Renewable Energies Agency. According to the results, 95% consider further expanding of renewable energy as „important“ or „extremely important”. The strong support has grown by 2% since last year [2016: 93%]. Sustainability and climate protection are considered to be the most important advantages.

For 65% of the population, the construction of renewable energy plants in their neighborhood would be considered rather „good“ to „very good“, according to the survey. Among those who are already familiar with the technology solar acceptance increases from 72% to 94% and wind from 57% to 69%.

The majority of respondents also agree to make their contribution to financing. 48% consider the current surcharge of the Renewable Energy Sources Act (EEG) to be „fair “ or „too small“, whereas merely 37 percent considered the surcharge to be „too high“. 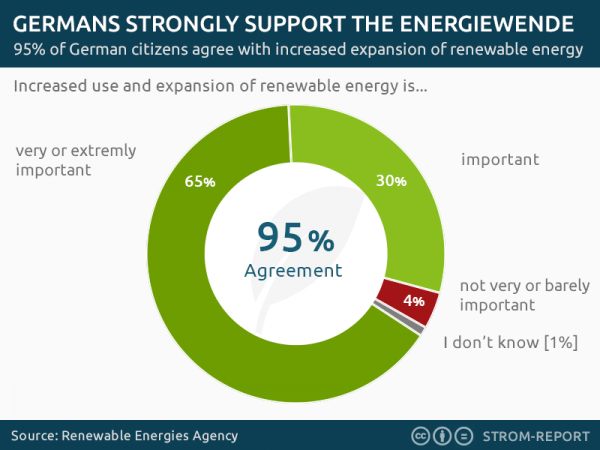 For this poll, 1,016 people were asked about their views on the Energiewende.

Do you have any questions about the Germans‘ opinion on renewable energy?

We’d love to hear what you think about the article or maybe you have a question about something you read. Either way, let us know by leaving a quick comment below.

Strom-Report Letzte Änderungen am 10. August 2017
Bewerten Sie den Artikel 95% of German citizens want more renewable energy
5,0/5 (1 Bewertungen)
About Strom-Report
Strom-Report [Power-Report] is a project run by a group of German data journalists. The blog was created to showcase infographics and visual thinking focused on energy topics and climate change.The blog is in English, the website itself is predominantly in German.
Stay connected
Twitter
Facebook
Pinterest
Article