According to numbers provided by Fraunhofer ISE renewable energy based electricity generation in Germany sets a new record in 2017 and represents now 38.5% of the country’s gross power generation. That made Renewables the most important energy source in Germany for four years in a row.

Total renewable electricity capacity was 210 TWh [bn kWh], a 16% increase on a year earlier. Above average wind and sunshine led to an increase in power generation from wind farms and PV installations with 88% of the annual increase coming from wind power alone. The record month with an all-time high of 14.9 billion kilowatt hours was December 2017, followed by October with 12.6 billion kWh. During the record months, wind power plants supplied 28% more electricity than German lignite-fired power plants. In April Renewables set a new record for energy use. 85% of all the electricity consumed in Germany was being generated from renewable energy sources on April 30.

Significant decreases were seen in nuclear energy. German nuclear power plants only made a contribution of 72 billion kilowatt hours in 2017. This reduces the share of the electricity mix to 13% [- 10% by 2016].

Hard coal suffered a 16% loss in 2017, generating only 83 billion kWh [99 billion kWh in 2016]. According to numbers delivered by the Federal Network Agency, 6 coal-fired power plants were shut down last year. 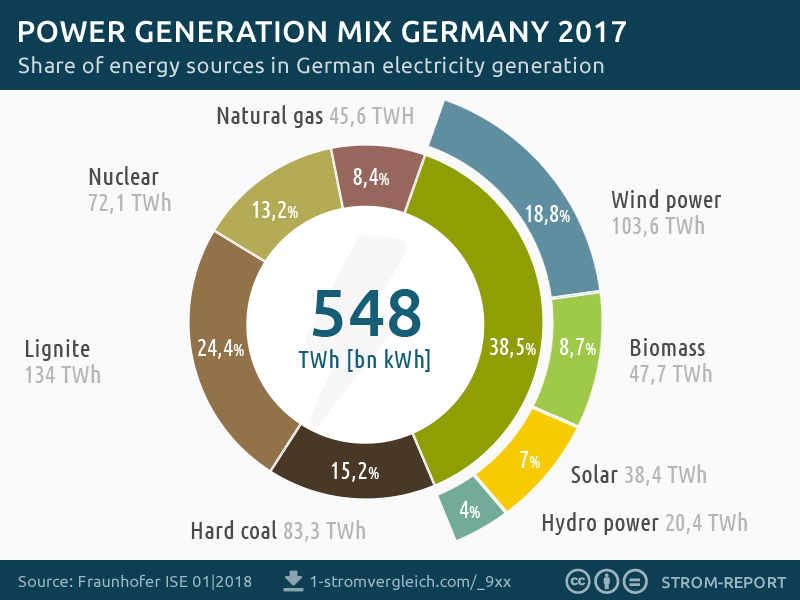 Do you have any questions about the German power generation mix?

We’d love to hear what you think about the article or maybe you have a question about something you read. Either way, let us know by leaving a quick comment below.

Tom Bond
Energy Girl Thank you Tom Bond
Energy Girl
@TomBond The figures for net power generation were available earlier this year. We added the gross power figures today.
Tom Bond
Dear Sir/madam The German Power Mix for 2017 has decreased from 648TWh in 2016 to 548 TWh. Why has this occurred? Is this a change from gross power generation to net power generation. If so this is not consistent. Do you have the gross power figures for each energy source for 2017. Thanking you in anticipation. Kind Regards Tom Bond
Strom-Report Letzte Änderungen am 17. Januar 2018
Bewerten Sie den Artikel Germany's Power Generation Mix 2017
5,0/5 (4 Bewertungen)
About Strom-Report
Strom-Report [Power-Report] is a project run by a group of German data journalists. The blog was created to showcase infographics and visual thinking focused on energy topics and climate change.The blog is in English, the website itself is predominantly in German.
Stay connected
Twitter
Facebook
Pinterest
Article