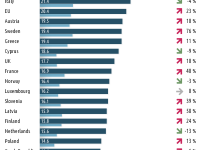 Electricity costs are on a continuous upward trend in Europe. These average values vary significantly across the European Union, ranging from 9.6 cents|kWh in Bulgaria to 30.5 cents in Denmark and Germany.

In Europe, residential consumer prices for electricity have long exceeded the industrial prices, and the gap has even become bigger in recent years. The highest residential electricity prices are paid in Denmark [30.5 cents] and Germany for many years in a row now. The price per kilowatt hour is more than three times higher than in Bulgaria [9.6 cents]. Belgium [28.0 cents] and Ireland [23.1 cents] are competing for the 3rd and 4th place.

The energy prices in the EU depend on a range of factors, including taxation, network charges or environmental protection costs. Taxes and levies make the biggest difference. Residential electricity rates are taxed at an average of 37%. These values vary greatly from one country to another, with rates as high as 67% in Denmark and 55% in Germany.

Electricity price in kWh per country in Europe 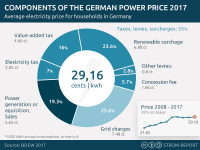 More than half of the power price for household consumers and small businesses in Germany consists of components determined by the state. These include charges for using power grids [25.6 %], levies for financing investment in renewable energy [23.6 %] and for other kinds of taxes [eg. GST 16%].

Renewable energy surcharge (EEG-Umlage 23.6 %)
The renewable energy levy to finance green power investment is added to Germans‘ electricity unit price. The surcharge pays the state-guaranteed price for renewable energy to producers and is 6.88 cents per kWh in 2017. A further increase for 2018 seems likely.

Part of net income paid for electricity bills in 2014 Residential energy prices in Europe are on a continuous rise since the beginning of 2010, but there are huge differences between the countries regarding the proportion of income households have to pay for their electricity bills.

Households in Denmark and Germany pay by far the highest prices per kilowatt hour, while people in Bulgaria pay the lowest, but when put into relation to purchasing power, Bulgaria is the place with the most expensive electricity followed by Latvia and Sweden. On the other end of the scale, Luxembourg has the cheapest electricity followed by Italy and the Netherlands. 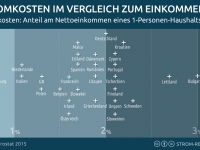 Energy poverty is a major concern across the EU, where 10% of the population says they are struggling to pay their energy bills. One third of the Bulgarian population [33%] is in arrears with their utility bills.

According to Eurostat many Croatians [30%] and Romanians [29%] are also behind in their bill payments. At the far end of the chart, slightly more than 3% of Luxembourgian and Swedish citizens are affected by energy poverty.

Electricity prices for household consumers are defined as follows: Average national price in Euro per kWh including taxes and levies applicable for the first semester of each year for medium size household consumers (Consumption Band Dc with annual consumption between 2500 and 5000 kWh). Until 2007 the prices are referring to the status on 1st January of each year for medium size consumers (Standard Consumer Dc with annual consumption of 3500 kWh).
Source of all data is Eurostat
Energy Girl
@Tom thank you for your comment. Source of data is the Eurostat database: http://ec.europa.eu/eurostat/data/database They collect the electricity prices for domestic consumers and income data as well. Energy poverty information are covered by the Energy poverty report conducted by the European Commission.
Tom
What kind of article is this? Bulgarians are unable to pay €10 per month for electricty? While in Portugal average el. bill is €70 and most people earn just €500-€800, which means about 10%, not 1%. It is impossible to have an electricty bill lower than €25 unless one lives in Madeira or the Azores (where there is no need for a/c or even for heating) and does not heat their house, plus heats water with solar power and uses oil lamps instead of electricity lamps. And then Sweden has third costliest electricity along with Bulgaria and Latvia at 18c per kwh? What kind of arithmetics is that? Latvia 16c and Sweden 18c yeat Latvians earn 5 times less than the Swedes. Also, the article never indicates what kind of tariffs are those? Are they for peak hours or for night hoursa or are they night tariffs? Judging by kwh in Portugal at 22c I can see on my bill that is for PEAK HOURS since other times of day and night costs 10c and 16c respectively and I thought that was very expensive.
Energy Girl
Thank you Harry, we're going to publish the new numbers in middle of July. I'll send you a short message. Linda
harry corrigan
Great graphics, when will you publish the 2017 numbers? Regards Harry
Benny
This is a comparison of KWH prices in Europe, which are stunning compared to the Morgan Household cost of $.081 per KWh
Strom-Report Letzte Änderungen am 18. Januar 2018 Strom-Report Eurostat
Bewerten Sie den Artikel Electricity Prices
4,9/5 (48 Bewertungen)
About Strom-Report
Strom-Report [Power-Report] is a project run by a group of German data journalists. The blog was created to showcase infographics and visual thinking focused on energy topics and climate change.The blog is in English, the website itself is predominantly in German.
Stay connected
Twitter
Facebook
Pinterest
Article