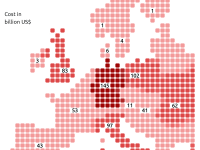 Air pollution harms human health and caused 600,000 premature deaths in 2010. As a World Health Organization study reported, this leads to an estimated US$ 1.6 trillion loss, which is equivalent to 10 percent of the European Union’s 2013 gross domestic product. The research covers all 53 Member States of the WHO European Region and assigns an economic value to the air pollution impact on European public health for the first time ever. Many of the air pollutants come from the same sources as greenhouse gas emissions: power plants, heavy industry and road transport. They accounted for 482,000 outdoor and 117,200 indoor early deaths from strokes, heart and respiratory diseases. The mortality rates are five times higher in low-and middle-income countries. The economic value corresponds to the amount countries are willing to pay to avoid these deaths and diseases.

Strom-Report Letzte Änderungen am 25. Februar 2017 WHO
About Strom-Report
Strom-Report [Power-Report] is a project run by a group of German data journalists. The blog was created to showcase infographics and visual thinking focused on energy topics and climate change.The blog is in English, the website itself is predominantly in German.
Stay connected
Twitter
Facebook
Pinterest
Article